What to do in Laos: our highlights guide

It’s rare to find a part of the world that remains untouched by major outside influences, commerce or industry, but this is the reality of Laos. Buddhism breathes through the country, influencing every aspect of daily life and lending a tranquil atmosphere to its towns and villages. Rivers like the Mekong travel Laos’ length, sustaining its people and nourishing its rice paddies and coffee, tea and cashew nut plantations.

Things to do in Laos, my selected highlights

Each day as dawn breaks over the former royal capital of Laos, silent processions of hundreds of saffron-robed monks thread through streets bordered by cafes, markets and a multitude of golden stupas. Many are novices from Luang Prabang’s temples, the most important being Wang Xieng Thang, which is adorned with gold-painted figurines and intricate mosaic-covered walls.

Early in the morning locals wait patiently with their offerings on mats for the monks to pass by. This is an age-old ritual for Buddhists, conducted in silence, and the food collected forms an important part of the monks' daily diet.

If you wish to make an offering or observe the alms-giving, it’s best to avoid Luang Prabang’s hectic main thoroughfare and search out side streets and wait alongside residents to give your food parcel.

Laotian food is heavily influenced by Vietnamese, Cambodian and Thai cuisine, and  certainly tantalises the taste buds. The national dish, Laap, is a mixture of minced fish, beef or chicken cooked with mint and chilli, fish sauce, lime juice and sticky rice. Dishes are simple, but tasty and often incorporate chilli, although they tend to be less spicy than Thai food.

Luang Prabang is one of the best places to learn how to cook typical Laotian fare. Tamarind, a restaurant with a picturesque riverside location, has a cookery school housed in open-sided thatched pavilions overlooking the landscape.

Morning cooking classes begin with a visit to pick produce from Tamarind’s own vegetable garden followed by a trip to Luang Prabang’s morning market, which is crammed into the side streets between the town’s main avenue and the river.

The sharp, clean scents of fresh mint and lemongrass hit you as you approach the stalls. The locals are easy-going and less forthright than stallholders I’ve met in other parts of Indochina, and there’s plenty of light-hearted joking as they hand out free samples and compete for your custom.

Armed with your ingredients, you return to the school to cook them, before enjoying your creations for lunch. Tamarind also offers evening cookery classes, which include a visit to Luang Prabang’s night market, where you can try the street food on sale, including spicy papaya salad.

Vientiane is flourishing thanks to new trade routes opening with Thailand and an increased number of flights passing through its airport. The signs are unmistakeable: more and more luxury hotels are springing up and its restaurants are gaining international acclaim.

But for all that, Vientiane has retained its laid-back character. Compared with the whirr of noise and traffic you encounter in nearby Southeast Asian capitals such as Bangkok, Laos’ first city is much quieter and more relaxed.

Where other cities in Indochina have sought to throw off their colonial past by demolishing its remnants, Vientiane is different. Its tree-lined boulevards and French colonial architecture harks back to a different time and many of the brick buildings with their porticos and large shuttered windows are carefully being restored and renovated.

Tucked away in the northeast corner of Laos lies the Nam Et-Phou Louey National Park. Covered in cloud forest, it sits in the shadow of the poetically named Mount Forever and offers good hiking opportunities. But for me, the real reason to come here is the park’s night safari, which involves a boat trip deep into the jungle.

As twilight fades, your guide turns off the boat’s engine and you float downstream. Creatures on the banks begin to stir and your guide will highlight them with a torch – I saw wildcats and a python.

Discover the secret caves of the Pathet Lao

Not far from Nam Et-Phou Louey and nestled amongst soaring emerald karsts in remote, mist-shrouded northeast Laos, the Vieng Xai caves are a reminder of the country’s more troubled past.

In the 60s the Pathet Lao, a communist organisation, established a base within the honeycomb network of these caves. The cave system protected many from the bombing campaign waged by the USA in support of the Royal Laos Government.

Used as the headquarters for the party during Laos’ Secret War, communities of thousands lived in the dark caves by day, emerging only at night to farm. With a wry smile, my guide recounted a local myth that farmers would paint their cows in order to camouflage them in the fields.

On a more serious note, I was staggered by the scale of what the Pathet Lao managed to achieve here: the caves included hospitals, schools, exhibition halls, theatres and even an army barracks.

To the west, close to the Thai, Burmese and Chinese borders, sits the Nam Ha National Park. Treks here follow the pathways that locals have forged through dense primary forests, across craggy mountains and over rolling hills.

For logistical reasons you often pass through villages, so you might find yourself chatting with locals while buying refreshments at a makeshift shop. This is an opportunity to meet and learn about some of the hill tribes that live in the area, such as the H’mong or Akha tribes.

The Akha are recognisable by their black tunics adorned with pom poms, beads and metal disks, whereas the black dresses of the H’mong tribe are decorated with embroidery.

Cruise the Mekong and the Ou Rivers

The Mekong twists its way down through Laos and forms a natural border with Thailand. All manner of vessels, from longtail fishing boats and barges to cruisers, traverse its waterways, ferrying passengers and goods.

As well as being a relaxing way to travel, the country’s waterways reveal little vignettes of everyday Laotian life – fishermen casting nets, children playing and buffalos cooling off from the heat of the sun.

For a relaxed experience of the Mekong, there’s the two-day Luang Say cruise, starting from the Thai border and staying overnight in the modest but comfortable Luang Say Lodge in Pakbeng, before journeying on to Luang Prabang.

Alternatively, Laos’ far north can also be explored by boat. As you travel up the Ou River towards the Nong Khiaw Valley and the secluded village of Muang La, the scenery begins to change and dense vegetation gives way to sheer cliffs and more mountainous terrain. Few visitors make it this far north. It’s an altogether wilder, untouched landscape – and in my opinion, one of the most special places in all of Laos.

Discover the Wat Phou temple and the Bolaven Plateau

Allegedly the blueprint for Angkor Wat in nearby Cambodia, the ruined Khmer Hindu temple of Wat Phou is found in the sleepy tropical region of Champasak in the south of the country.

The tumbledown remains of the three-tiered complex rise up between rice paddies watched over by Mount Phou Kao, from which the temple takes its name. The site allegedly dates back as far as the pre-Angkorian Chenla kingdom, which ruled the area in the 6th to 8th centuries.

I walked up stone steps bowed with centuries of wear to find that the temple’s crumbling façades are best appreciated from the top. The steep perspective of its three tiers gives rewarding views, with the Mekong shimmering in the distant haze.

It’s easy to combine a visit to this UNESCO World Heritage Site with the nearby Bolaven Plateau. Here the higher elevation and the rich fertile soil create an environment that is perfect for coffee and tea plantations and the lush jungle, toppling waterfalls and tribal villages make it an interesting area to visit.

Enjoy the slow pace of life in the 4,000 Islands

Further south, the Mekong River swells to its widest as it negotiates the Si Phan Don Archipelago, or the 4,000 Islands. Time here slows to reflect the easy, laid-back nature of the islands’ inhabitants, whose existence revolves around the river.

In truth, the 4,000 islands can be touristy, but you can spend a pleasant day exploring the islands by boat with a private guide. With a little luck, you’ll spot a pod of the rare Irrawaddy river dolphins, which swim these waters and you can also venture to Khone Falls, the largest waterfalls in Southeast Asia. It is here that the mighty Mekong leaves Laos and crashes into Cambodia.

Start planning your trip to Laos 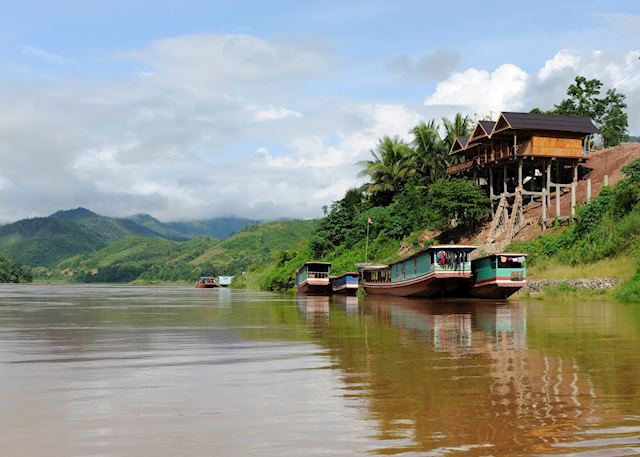