The Anti Atlas is the hub of all commerce in Morocco’s grocery trade: banana and orange groves flourish among the extensive vegetable crops. This is the principal region in which the arganier, pretty much unique to Morocco, flourishes and the foothills of the Anti Atlas are dotted with the trees. 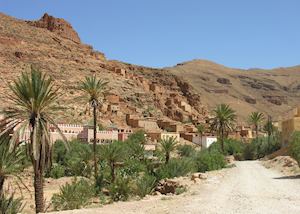 Similar in appearance to olive trees the argan fruit is harvested during the hot summer months, mainly by women and children from the local Berber hamlets and villages. The Chleuh Berbers are the original inhabitants of this area and most men travel to other regions of Morocco and abroad to trade, traditionally in the grocery market. Money is sent back to families who tend the stock and harvest the land and many return to the area in their retirement, building large villas among the small stone villages of the mountains. Here the pink granite rock formations dominate the landscape, palm plantations and almond trees line the beds of the valleys and the distinctive red painted stone houses enhance the region's distinct character.

This sample itinerary will give you an idea of what is possible when you travel in the Anti Atlas, and showcases routes we know work particularly well. Treat this as inspiration, because your trip will be created uniquely by one of our specialists.

Map of the Anti Atlas

Places near the Anti Atlas