Essaouira lies on the Atlantic coast west of Morocco and is one of the most picturesque towns in the country. Originally a Phoenician trading post, it prospered during the Roman era as citizens extracted the Tyrian purple colour, beloved of Roman Emperors and kings, from a local shellfish.

The Sultan Sidi Mohammed had a captive Frenchman design the town and promoted trade, making Essaouira a cosmopolitan commercial centre. 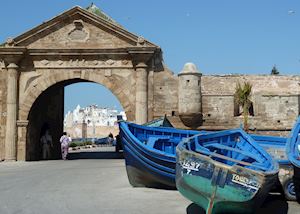 Our expert guides to exploring Essaouira

Written by our specialists from their own experiences of visiting Essaouira, these guides will help you make the most of your time there. We share both our practical recommendations and the best ways to appreciate Essaouira at its best.