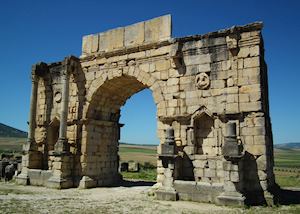 The well-preserved basilica, triumphal arch, and columns of the Capitoline Temple all stand below a wooded escarpment, and cast shadows over the most impressive aspect of the city: the mosaics, many of which are as vivid and colourful as the day they were laid.