Audley client Scott recently traveled with his son and friends to Mount Kilimanjaro in Tanzania on a trip planned by Africa Specialist Joanna, all in the name of charity.

From our very first steps upon the mountain, our guides from Tanzania Matei and John began teaching us the Swahili mantra for climbing Kilimanjaro — pole pole (pronounced "polay polay"), meaning slowly, slowly. They were upbeat and jovial from the moment we first met them, as were the entire crew who helped us carry the gear up the mountain — including Heaven, our cook.

On the second day, the trail — ever upward — became considerably more difficult, peppered with large stones and small boulders which we wound our way through as the rainforest gave way to an arid scrub landscape. That evening we were again treated to a hot meal in the dining tent, and Heaven received a group hug.

The air had become considerably thinner on the third day, and we hiked — pole pole — in single file placing our boots in the footprint of the one in front of us. Walking now through a rocky terrain on our way to the Lava Tower, which at over 15,000 feet was the highest any of us had been before in our lives.

On the fourth and fifth days, the trail took us through a series of descents and ascents as our bodies slowly acclimated to the mountain. Always pole pole. By the end of the fifth day, we had once again climbed to well over 15,000 feet and this time camped at Barafu — the “high camp”. 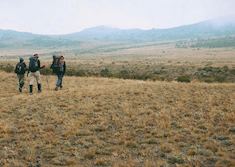 Africa's largest peak, Mount Kilimanjaro, is found in Tanzania and a trek to the summit can be included a tailor-made vacation with us. If you're an avid trekker, you might also like to consider exploring Mahale Mountains National Park. 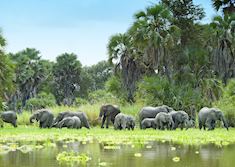 The Great Migration of wildebeest and zebra through the Serengeti is not the only highlight of Tanzania. We have come up with five of our favorites, from climbing Kilimanjaro to relaxing on the beautiful island of Zanzibar. 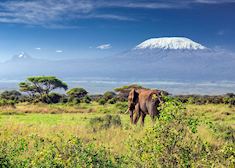 Standing at 5,895 meters tall, Kilimanjaro towers over the plains of Kenya and Tanzania. With knowledgeable guides it is possible to climb it over the course of several days.

View All Tours in Tanzania