Known for being one of the greatest dinosaur fossil beds in the world, thirty-nine dinosaur species, dating back more than 75 million years, have been discovered here and more than 500 specimens have been removed for exhibition in museums worldwide. 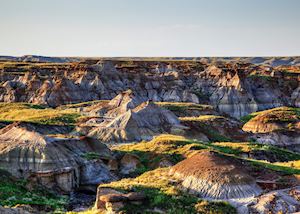 The park boasts a very complex ecosystem, including cottonwoods surrounded by prairies and some of the world’s most northerly cactus species. Jackrabbits, deer, pronghorn antelope, rattle and garter snakes are found in the park, while at dusk coyotes and nighthawks are commonly seen.

This sample itinerary will give you an idea of what is possible when you travel in Dinosaur Provincial Park, and showcases routes we know work particularly well. Treat this as inspiration, because your trip will be created uniquely by one of our specialists.