The park is named after a Cree word meaning 'wonder' and this is a fitting description for the breathtaking scale of its mountain scenery. Despite its proximity to Lake Louise, Yoho lies on the opposite side of the Continental Divide, entirely within British Columbia.

The park is renowned for the Burgess Shales, a very rare sedimentary rock up to 530 million years old, and also for the overwhelming beauty of Lake O’Hara, Takakkaw Falls and Emerald Lake. 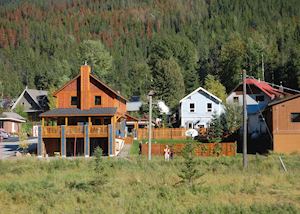 The tiny town of Field is the park’s only settlement and its history is intrinsically entwined with the early days when the spectacular landscape was conquered by rail, built through magnificent feats of engineering such as the famous Spiral Tunnels.

Our itineraries will give you suggestions for what is possible when you travel in Yoho National Park, and they showcase routes we know work particularly well. Treat them as inspiration, because your trip will be created uniquely by one of our specialists.

Written by our specialists from their own experiences of visiting Yoho National Park, these guides will help you make the most of your time there. We share both our practical recommendations and the best ways to appreciate Yoho National Park at its best.