Renowned for the beauty of its old town, Dubrovnik was once a powerful independent city-state and remains one of the best-preserved walled towns in Europe. Baroque churches sit on grand squares, shuttered townhouses line limestone streets, and vibrant bougainvillea cascades down steep, narrow lanes that lead to the azure waters of the Adriatic. Today, Dubrovnik stretches well beyond the city walls in a series of suburbs that line the coast and offer a quieter place to relax, swim and soak up the sun than the café and restaurant-lined streets of the old town.

There are other medieval walled cities in Europe, but nothing quite like Dubrovnik. To get away from the crowds drawn here by Game of Thrones, I suggest a sunset walk on the walls, which will afford you views of the whole city as well as the sea.

Things to see and do in Dubrovnik

One of the first things you might like to do on arrival in Dubrovnik is to walk the 9th-century city walls for sweeping views of the old town and the seafront. Tell-tale new roof tiles reveal just how much of the city had to be rebuilt after the Croatian War of Independence, while the 15 forts added in the 14th century demonstrate just how long the city has defended itself from attack.

The most impressive of these fortifications is Fort Lovrijenac (Fort Lawrence) which sits on an outcrop of rock guarding the western approach to the city. You may also know it as the Red Keep from the TV series Game of Thrones. 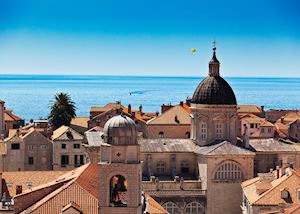 The winding limestone streets of Dubrovnik’s old town are hemmed in by the city walls and awash with ornate Baroque buildings. An earthquake in 1667 razed much of the medieval town and the city planners set about rebuilding Dubrovnik in an elaborate style.

The Cathedral of the Assumption is best known for its polyptych by Titian behind the main altar and for its treasury which contains the relics of Saint Blaise. Also worth a visit is the Gothic-Renaissance Rector’s Palace, now home to a cultural history museum, and the Franciscan monastery with its delicate 14th-century cloister, 11th-century pharmacy, and small museum.

This forested island just ten minutes by ferry from Dubrovnik is the best place for swimming near the old town. Although its beaches are rocky, the water is clear and if you tire of the sun, you can visit the island’s Benedictine monastery which has a fragrant botanical garden. At the heart of the island lies the 19th-century Royal Fort which offers good views down over the surrounding landscape.

For expansive views over Dubrovnik, the coast and the surrounding islands, take the cable car up to the summit of Mount Srđ which sits at 412 m (1,352 ft) above sea level, rising up behind the city. If you can, aim to be here at sunset for the best views of the town. Near the summit cable car station is the Imperial Fort, a sturdy, early 19th-century defence post built by the French during the Napoleonic Wars. The fort houses the Homeland War Museum which details the history of the fort as well as the Siege of Dubrovnik in the early 1990s. 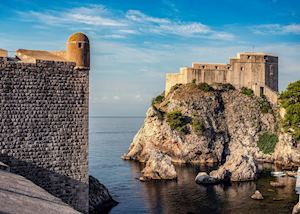 If you want to follow in the footsteps of the Lannisters, Dubrovnik is a good place to start. TV network HBO used Dubrovnik as a location for filming Game of Thrones from 2011 to 2016 and today, many fans make a pilgrimage here to see these locations first-hand.

The city’s Spanish Steps were the scene of Cersei’s naked walk through King’s Landing to the Red Keep (Fort Lawrence). The 15th-century Minčeta Tower doubled as the House of the Undying, and Lokrum was the setting for the city of Qarth with many scenes filmed in the monastery’s botanical garden. If you make it as far as the visitor centre, you can sit in a reproduction of the Iron Throne.

Dubrovnik makes a good year-round destination, though to avoid the worst of the crowds and the heat it’s best to plan a trip outside of July and August. April to June and September and October offer pleasant but cooler temperatures and fewer people on the streets. Although most hotels and activities are available year round, some are closed from November to March.

Our itineraries will give you suggestions for what is possible when you travel in Dubrovnik, and they showcase routes we know work particularly well. Treat them as inspiration, because your trip will be created uniquely by one of our specialists.

Our expert guides to exploring Dubrovnik

Written by our specialists from their own experiences of visiting Dubrovnik, these guides will help you make the most of your time there. We share both our practical recommendations and the best ways to appreciate Dubrovnik at its best.

We’ve selected a range of accommodation options for when you visit Dubrovnik. Our choices usually come recommended for their character, facilities and service or location. Our specialists always aim to suggest properties that match your preferences.

Our specialists seek out authentic ways to get to know the places that could feature in your trip. These activities reflect some of the experiences they've most enjoyed while visiting Dubrovnik, and which use the best local guides.