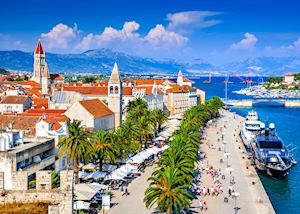 The town’s waterfront promenade is a traffic-free area lined with outdoor cafés and ice cream shops, bars and bobbing yachts, and a magnet for walkers on summer evenings. Further inside the walls, a maze of narrow streets and back alleys play home to local residences, art galleries and restaurants.

Opposite the cathedral sits the grand Cipiko Palace, the palatial home of a prominent local family in the 15th century. Its carved detailing on the façade and the Gothic trefoil windows are more recent additions to what started out as a group of Romanesque buildings first remodelled in 1457. 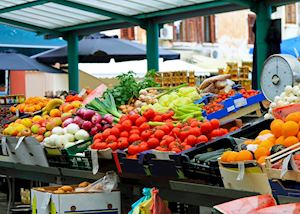 On the eastern end of the southern shore of the island, a bridge leads over to the far larger Čiovo Island, which is worth a visit to explore its remote pebble beaches and seafront bars and cafés.

Our itineraries will give you suggestions for what is possible when you travel in Trogir, and they showcase routes we know work particularly well. Treat them as inspiration, because your trip will be created uniquely by one of our specialists.

We’ve selected a range of accommodation options for when you visit Trogir. Our choices usually come recommended for their character, facilities and service or location. Our specialists always aim to suggest properties that match your preferences.