Once one of the largest fortress cities in the Republic of Venice, Zadar frequently changed hands over the course of its history and built up a rich architectural and cultural heritage along the way. Set on a small peninsula on the Dalmatian coast, its car-free streets provide a tranquil place to stroll among a rambling collection of Roman, medieval and modern buildings. Its strong café culture and low-key nature make it a pleasant place to wander, while its waterfront offers contemporary art installations, numerous cafés and good ferry links. There are also its sunsets, which Alfred Hitchcock declared the most beautiful in the world. 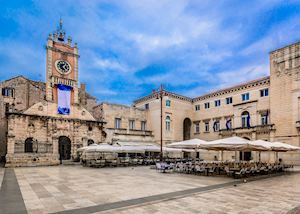 You enter the old town of Zadar though the Land Gate, an ornate 16th-century structure with three arches that sports the city’s coat of arms. Nearby is the 17th-century Church of Saint Simeon, with a relatively simple exterior in provincial Baroque style. Inside, you’ll find Saint Simeon’s Chest, a carved cedar sarcophagus covered in a layer of gold- and silver-plated reliefs. The 14th-century chest is considered a medieval masterpiece, the delicate reliefs showcasing the skill and craftsmanship of metalworkers at the time. 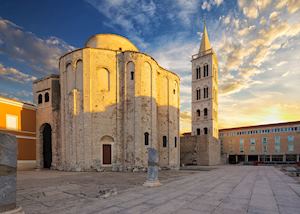 You’ll also get good views from the nearby Captain’s Tower, a 13th-century defence post, from where you can look down over Five Wells Square, where five 16th-century wells were once the main water source for the city.

Walking along the waterfront it’s impossible to miss the city’s most celebrated attraction, the Sea Organ. Set on the tip of the old town peninsula, it was designed by local architect Nikola Bašić and uses the power of the waves washing over a set of stone steps to push air through hidden pipes to produce random but harmonic musical notes. Even when the sea is calm the effect is eerily impressive, but on stormy days, when the sea is rough, the organ sounds like an avant-garde musical set-piece.