Looking like a little piece of Venice on Croatia’s Istrian coast, Rovinj is both a historic town once under Venetian rule and an Italian-inspired beach resort. You can easily walk its distance in an hour, but it and the surrounding coast hold enough to occupy you for at least a couple of days. The church of Saint Euphemia, with its campanile and sunset-facing terrace, marks the town’s highest point, and the stony Adriatic-lapped beaches its lowest. The town is buoyed by a glut of restaurants, cafés and gelaterias, out of which you’d be unlucky to pick a dud. 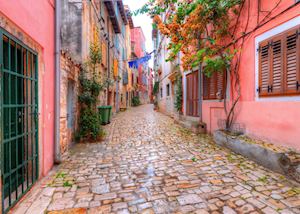 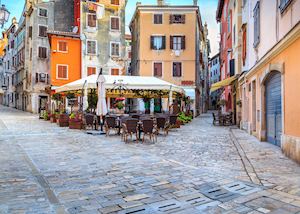 On the edge of the old town, the Rovinj Heritage Museum introduces you to the locality, its inhabitants and its way of life. The building itself, with its candy-pink façade, is a former palace in the Baroque style and sits in the main square close to the water. The museum serves as both an art gallery and exhibition space, leading you through collections stretching from prehistoric archaeological remains found in the area to contemporary art by Croatian and international artists.