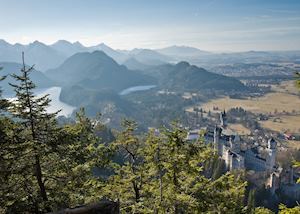 The interior is filled with homages to the composer, including walls of frescoes depicting scenes from the legends that inspired Wagner’s operas, and a theatre permanently featuring the set of one of his works.

A footbridge wedged between two sheer cliffs, Marienbrücke offers the best views of Neuschwanstein. Situated 90m (295 feet) over the Pöllat river, the bridge is not for the faint of heart. Marienbrücke is a short walk from where the shuttle drops you off at the entrance of the castle.

Make your way to the grotto, an artificial dripstone cave inspired by the Hörselberg in the Tannhaüser opera Wagner wrote. A glass door lowers into one of the rocks, inviting you from the grotto to the conservatory.