A guide to visiting Oman for the first time

Also, it’s much less crowded than its better-known counterparts on the Arabian Peninsula, so you can enjoy the natural splendor and cultural treasures without jockeying for space with throngs of other visitors.

Muscat — forts, a fish souq and a grand mosque

Sprawled along the coastline of the Arabian Sea, Muscat has an old-fashioned elegance that’s been lost in other regional capitals. Instead of glitzy high-rises and tour groups, you’ll find low, white-washed buildings that sport arabesque windows, pointed domes and delicate balconies.

Don’t let the consistency of the architecture fool you, however — Muscat packs a wealth of diverse activities into its narrow length, including beaches, souqs, a grandiose mosque and not one, but two forts.

The Old Town is a walled city on the coast, its natural port overlooked by twin forts — Al Jalali and Al Mirani — both built by the Portuguese in the 16th century. Its main coastal boulevard, a scenic corniche, acts as a gateway to the old part of the city and you’ll see locals strolling together to enjoy the waterside views and cafes.

Inside the area’s tight and twisty lanes, I like to visit both the main souq as well as the fish souq. Both are traditional markets, intended to serve the city’s population rather than photo-ready attractions. The fish market in particular is a fascinating glimpse into the everyday lives of Omani subjects.

It’s filled with heaped piles of silvery fish, some as short as my little finger and others longer than my arm, as well as baskets of translucent prawns, pale-bellied crabs and long-limbed octopuses. The smell can be a bit much, but it’s a rare glimpse into the daily lives of the Omani people. I love to watch the merchants sling around the huge slabs of fish, measure out a steak with their hands and then chop, cut it right there with their long, slightly curved knives.

West of the Old Town, the Sultan Qaboos Grand Mosque is probably the city’s crowning architectural achievement. Completed in 2001, it’s a vast place of worship whose gracefully latticed domes and elegant arabesque minarets are sculpted from cool white marble that seems to shimmer in the strong sun.

Of course you can easily explore on your own, but we can also arrange for a guided tour of Muscat to see most of these sites, as well as the Bait Al Zubair museum.

In addition to acting as the gateway to Oman, Muscat is also where you’re likely to end your trip, and I suggest adding a few days to relax and enjoy the city’s beaches and the turquoise sea. Consider a sunset cruise along the coast in a traditional wooden dhow or go snorkeling in the crystal-clear waters around the Daymaniyat Islands Nature Reserve.

Nizwa — a traditional livestock market, a massive fort and silversmiths

Ninety minutes’ drive inland from Muscat, Nizwa is a fort city surrounded by a palm oasis near the foot the Western Hajar Mountains. One of Oman’s oldest cities, it was once the country’s capital and a vital hub of Islamic learning for centuries, home to fractious leaders during the 1950s civil war. The city is still somewhat conservative, so please dress accordingly, but I found it very welcoming.

The Nizwa Fort looms over the city, historically and geographically. Though its foundations date to the 12th century, most of the sprawling fort was built in the 17th century.

The sprawling fort is ringed by massive, blank-faced walls, but the most notable aspect is the high tower topped by scalloped crenellations. If you make the ten-story climb to the top, you’ll get sweeping views of the green swathes of date palms and russet mountains that surround the town.

In the shadow of the fort, the Nizwa souq is one of the oldest in Oman. Though it’s located in a recently built arcade, it’s still a traditional market crammed with tiny stalls that primarily sell fruits, vegetables and meat, though there’s also a lively trade in silver goods. Omani’s smiths are world-renowned for their skills, and the city’s artisans specialize in khanjars — traditional curved daggers with intricate handles.

If you can, I suggest you time your visit for Nizwa’s Friday livestock market. Starting before sunrise, sellers from around the area bring in their animals by foot or truck, and by midmorning, it’s jam-packed with white-robed men, skittish goats, cranky cows and the occasional camel. Wear close-toed shoes if you plan to visit — footing can get a bit deep, thanks to all the nervous animals.

Outside of Nizwa — tiny villages and a grand canyon

Nizwa makes a good base for exploring inland, or you can choose to stay in the mountains themselves. Either way, you’ll need at least two days to see all the area has to offer: imposing forts, tiny villages and the nearby Al Hajar Mountains. We can arrange guided tours if you don’t want to venture onto the steep, narrow mountain roads by yourself.

At first glance, Jabrin Fort looks like a sister to Nizwa, with the same imposing walls and sturdy, plain construction. But this was originally a scholar’s retreat and not a military site, as indicated by the lavish interior, including painted ceilings, ornate wooden doors and pierced window screens.

Nearby, Bahla Fort might lack the elegance of Jabrin, but it’s a UNESCO World Heritage Site thanks to its enormous age and size. Dating back to 1,000 AD, the fort boasts walls that stretch for 12 km (7.5 miles), enclosing verdant palm plantations. The town is also known for its pottery and with many small shops clustered here, it’s a good place to browse.

Leaving the lowland forts, you can head up into the Jebel Akhdar mountains, which looms in the background of every photo from the region. The mountains are dark, high and daunting, and it can be hard to imagine anyone living here, but many small villages have flourished in the valleys and foothills for centuries.

Nestled at the foot of the region’s tallest peak, tiny Al Hamra is made of multi-story mud-brick houses that seem timeless, until you notice that many bristle with satellite dishes. I like to wander through on foot, following the irrigation channel, though watch out for random goats sauntering by.

Further up into the mountains, Misfah seems to cling precariously to a sheer cliff face, hanging over a canyon that’s dense with palm trees. The tall traditional mud-brick houses are best photographed from across the canyon, but you can wander along the narrow, twisting streets too.

Jebel Shams translates to ‘Mountain of the Sun’ and it’s easy to see why as you climb the slopes of the highest mountain in the region. The steep slopes are sparsely covered in brush and a few tenacious trees that grow from narrow clefts in the rock. The mountain has a certain bald-faced majesty, but the main attraction here is Wadi Ghul.

Known as the Omani Grand Canyon, Wadi Ghul is a massive, gawping chasm, as if something had simply cracked the world apart. When I went, there were no other visitors to distract me from the vistas of jagged, distant peaks and the dry riverbed far, far below. There aren’t any safety guards either, so please be careful not to come too close to the vertiginous edge of the cliff.

Wahiba Sands — sunset and stargazing in a vast desert

I never understood why the vast, yawning emptiness of the desert has inspired poets and prophets over the centuries. Then I went to the Wahiba Sands and I could see why the size and beauty of the endless-seeming golden dunes have moved so many.

As barren and sun-blasted as it is, I was surprised to learn that the desert is home to a surprisingly diverse ecosystem that includes 150 species of plants and 200 species of mammals, birds, and reptiles, as well as several thousand Bedouin people.

There are a few ways to experience the desert, which is a four-hour drive from the capital. I opted for the one that involved plenty of creature comforts. The 1,000 Nights Desert Camp may lack the romance of camping by myself, but I enjoyed having a hot shower, swimming pool, well-appointed tent and catered buffet dinner.

The black wool tents, with striped fabric walls and comfortable beds, are a pleasant compromise between an authentic Bedouin experience and a decent night’s sleep.

After I arrived, I climbed up one of the nearby dunes, my feet slipping in the soft, hot sand. At the top, I watched as the fiery sun slowly sank behind the heat-shimmered horizon, and the blue sky faded to indigo and then black.

Once it was fully night, a dark deeper than I’d ever seen elsewhere, I followed a line of flickering lanterns back down to camp and took a seat around a crackling fire to wait for dinner. While I ate, I admired the high, black vault of the sky, dense with glittering stars.

Read more about trips to Oman 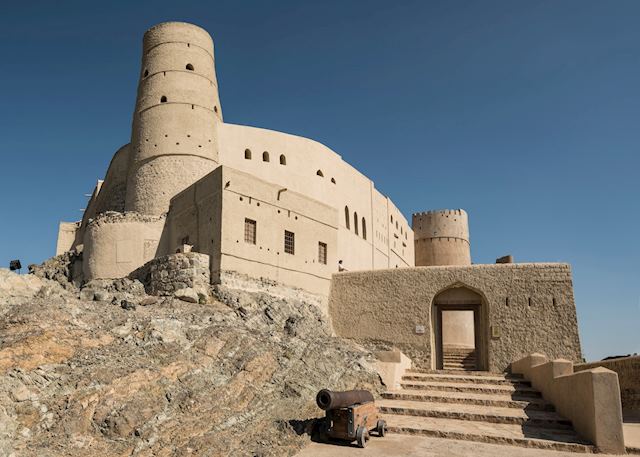