East Africa’s largest and most cosmopolitan city, Nairobi balances a frenetic heart with leafy suburbs and its own national park, which is particularly known for its rhino population. While the city’s often used as a means for flying in and out of Kenya, there’s more than enough to see and do here to fill several days before or after your safari.

In the peaceful suburb of Karen, you could visit the Sheldrick Wildlife Trust to see orphaned elephant and learn how they’re rescued and rehabilitated back into the wild. Nearby, the Karen Blixen Museum is housed within the renowned Danish author’s former home, where you can discover more about her life and work. You can get a sense of the city’s entrepreneurial outlook with visits to community-run projects. Or, venture just outside the city to hike among the nearby Ngong Hills, taking in sweeping views over the skyline.

Things to see and do in Nairobi 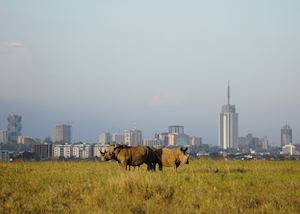 There are very few places on Earth where you can see a rhino against a backdrop of skyscrapers. Nairobi National Park, on the city’s southern outskirts, is one of them. The park may be relatively small compared to most others in Africa and (understandably) fenced off on the city side, but you’ll see wildlife in abundance on game drives that might even start straight from the airport.

We recommend heading into the park in the early morning when animals are at their most active. There are more than 50 black rhino here, making it one of the world’s densest populations. You’ll also have a chance of seeing lion, giraffe, hyena, zebra, ostriches, and buffalo, more than 400 bird species, and, with a large dose of luck and patience, cheetah and leopard.

Situated within Nairobi National Park, this is one of the largest and most successful elephant orphanages in the world — almost 300 elephant have been raised here. Most of them have been rehabilitated into the wild and have gone on to have their own young. 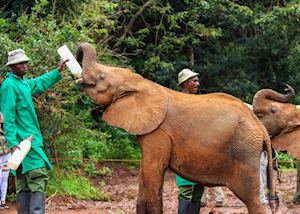 You can visit the orphanage for an hour to see the elephant as they’re bottle-fed by the project’s team. During your visit, you’ll hear about some of the rescue missions undertaken — most of the elephant are orphaned due to poaching, habitat loss, drought, and human-wildlife conflict. You’ll also learn about what it takes to raise and eventually reintroduce the orphans into the wild.

Afterwards, you could visit the nearby Giraffe Centre, run by the African Fund for Endangered Wildlife, to see endangered Rothschild giraffe up close and learn about the work that’s being done to conserve the species.

Situated in the former farmhouse of the renowned author of Out of Africa, ‘at the foot of the Ngong Hills,’ as she writes in her book, the Karen Blixen Museum gives you an insight into Blixen’s life in Nairobi between 1917 and 1931. Each room has been recreated to reflect what it would have looked like while she was living here, including the original furniture. Information panels tell you more about both her professional and personal life.

You can explore on your own or with a guide who’ll be able to fill in any gaps and answer any questions you have. Afterwards, you can stroll the farm’s expansive, tree-filled grounds, which feel a world away from the city streets.

Hiking in the Ngong Hills 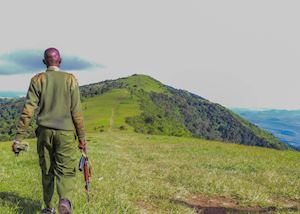 The seven Ngong Hills, about an hour and a half’s drive outside of Nairobi, are named for their knuckle-like appearance. With a guide leading the way, you can head out on a three-hour hike among their green slopes while looking out for vervet monkeys, buffalo, sun birds, and buzzards.

Each time you reach the top of a hill you’re rewarded with far-reaching views over Nairobi and the surrounding countryside. On a clear day (January and February usually have the best conditions) you might have views of Mount Kilimanjaro on one side and Mount Kenya on the other.

There are several ways you can explore Nairobi’s entrepreneurial spirit. You could visit Mo Kartarchand’s workshop, where for around 30 years he’s been commissioned to revamp and convert matatus (privately owned minibuses used for commuting) for a variety of uses by everyone from business owners to the president of Kenya.

During your visit, he’ll show you around his working garage while talking you through some of his latest projects, whether he’s painting an intricate design onto the bodywork or repurposing one into a food truck. He’ll also share a bit about his background and the apprenticeship scheme he runs for others who didn’t have a head start in life.

We also recommend a tour of Kazuri Beads, a charity that gives single mothers and other women a chance to learn skills in creating necklaces, pottery, and other items to sell in its shop. You’ll be shown the process from start to finish, from drying and shaping the cement to blasting it in the kiln and painting it, before having time to browse the gift shop.

There’s also Ocean Sole, a small conservation group that pays people to collect flip flops abandoned in rivers and along beaches. They then upcycle them into works of art that you can buy, using any remaining parts from the flip flops to stuff mattresses that are then donated to orphanages and refugee camps.

Being a city, Nairobi can be visited at any time without the weather affecting much of your plans. That said, March to May tend to be rainy, so are best avoided if you’re pairing a city stay with time on safari. The dry season, when wildlife is easiest to spot, generally runs from July to September, though safaris are rewarding outside of these months, too.

Our itineraries will give you suggestions for what is possible when you travel in Nairobi, and they showcase routes we know work particularly well. Treat them as inspiration, because your trip will be created uniquely by one of our specialists.

We’ve selected a range of accommodation options for when you visit Nairobi. Our choices usually come recommended for their character, facilities and service or location. Our specialists always aim to suggest properties that match your preferences.