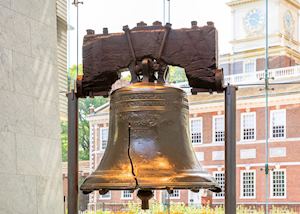 The centre of the city still boasts a downtown core of shady cobbled streets and red brick houses in the Independence National Historical Park, which is reputed to be America's most historic square mile. Independence Hall, Congress Hall and Carpenter's Hall are all here, along with the Liberty Bell.

The city boasts some outstanding art museums, including the Philadelphia Art Museum, the Rodin Museum and the Franklin Institute Science Museum which honours the life and work of Benjamin Franklin, the city's most famous ambassador. Modern Philadelphia is, of course, much more than its historic quarter and boasts some excellent museums, nightlife and entertainment.

This sample itinerary will give you an idea of what is possible when you travel in Philadelphia, and showcases routes we know work particularly well. Treat this as inspiration, because your trip will be created uniquely by one of our specialists.