The north of Vancouver Island is wonderful for lovers of nature and wildlife.

Much of this region consists of rugged unspoilt wilderness such as the huge Strathcona Provincial Park, honeycombed by an extensive network of underground caves.

The region’s largest town is Campbell River, particularly renowned for its Chinook salmon fishing and for the views over the Strait of Georgia. Nearby Quadra Island has fine sandy beaches and a distinct flavour of its First Nations’ heritage, well represented in the Kwagiulth Museum and Cultural Centre, whilst nearby Cortes Island has some of North America’s finest sailing and kayaking areas. The small village of Telegraph Cove, raised on wooden stilts over the water, is the start point for whale watching trips in the Johnstone Strait while at the northern tip of the island Port Hardy is the terminal for ferries to and from Prince Rupert: Canada’s most awe-inspiring bear watching trips start from here or from Campbell River. 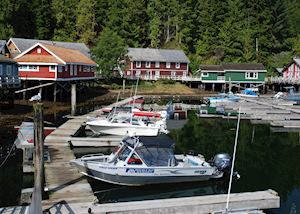 The calm, protected waters of Johnstone Strait on the northeast coast of Vancouver Island are widely acknowledged as the most accessible and predictable location to see orcas (killer whales) in the world. Comfortable 20 metre vessels, fitted with heated seating areas and toilets, cruise these waters using hydrophones to track the larger pods — and allow guests to listen to their ethereal song. Trained naturalists are on hand to explain the life of orcas as well as the porpoises, Pacific white-sided dolphins, sea lions and seals that are also often seen.

Our itineraries will give you suggestions for what is possible when you travel in Northern Vancouver Island, and they showcase routes we know work particularly well. Treat them as inspiration, because your trip will be created uniquely by one of our specialists.

We’ve selected a range of accommodation options for when you visit Northern Vancouver Island. Our choices usually come recommended for their character, facilities and service or location. Our specialists always aim to suggest properties that match your preferences.