Located steps from the neoclassical columns of the Brandenburg Gate, the Hotel Adlon Kempinski’s prestigious location is matched only by its amenities and services. The storied hotel has long defined the height of opulence in Berlin, hosting everyone from Michael Jackson to Thomas Edison. Though it was destroyed at the end of World War II, the building was restored to its former magnificence and reopened in 1997.

Designed with extravagance in mind, the warmly lit lobby features a large Murano glass chandelier, an ornate elephant fountain and dark wood and marble throughout. You’ll also find two Michelin-starred restaurants, an expansive spa and a coffee shop in the hotel.

The old-world feel extends to the rooms and suites through mahogany and cherry wood furnishings and flashes of gold. All the rooms are spacious and boast views over the square or inner courtyard.

We like this hotel for its exceptional service and over-the-top amenities, such as the Michelin-starred restaurants and extensive spa, as well as for its can’t-be-beat location on Unter den Linden.

There are 382 rooms and suites in Hotel Adlon Kempinski, all very generously sized. They are traditionally and elegantly decorated with dark wood and gold.

There are a handful of room categories, including Executive rooms, Deluxe rooms and Superior Deluxe rooms. There are also a few suite options, including the hotel’s crown jewel, the Imperial Suite, which features an in-room sauna and hot tub.

All rooms come with a Nespresso machine, Wi-Fi, air conditioning and an en suite bathroom with both a bathtub and separate shower.

The Hotel Adlon Kempinski is situated in Mitte, right next to Brandenburg Gate in the pedestrian area. This area of Berlin is full of shops, restaurants, cafés and entertainment. It’s a short walk to the Memorial of the Murdered Jews of Europe and numerous other museums.

There are two accessible rooms available.

Berlin and nearby places 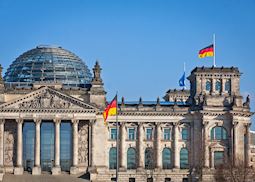