The walking safaris we recommend are lead by Kerry Glen who grew up in Africa and is now raising her own family in the bush. She is accompanied by a team of guides and camel handlers, all whom were raised in Northern Kenya.

One of the great characters of the team is Shillingi, a Maasai elder. In the past he hunted elephant on foot with a bow and arrow, and now uses these skills as a formidable tracker. Whilst many of the camel handlers and camp crew don’t speak English or Swahili they’ll always be delighted to show you a bird that has perched on a nearby bush or play (and win) a game of football when in camp.

Accommodation is in traditional canvas safari tents, large enough for a double mattress, blankets, pillows and rugs. Torches, drinking water and bathrobes are supplied. The tents have netting at the front so when you wake up, you can see the sun spreading across the sky.

Bucket showers and toilets are to the rear of camp. Meals are taken in a central mess area, with comfortable canvas safari chairs. There is always a campfire at night.

Each day the crew packs up the camp and puts it on the backs of the camels who carry it to the next spot.

Tour ideas in The Laikipia Plateau

Our itineraries are there to spark ideas for how you could include a stay at Karisia Walking Safaris as part of your trip. Treat them simply as suggestions, because every aspect of the trip we create for you will be yours to define.

View all accommodation in The Laikipia Plateau

The Laikipia Plateau and nearby places 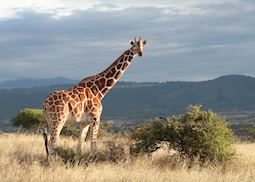 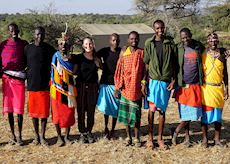