Covering over 5,700 square miles (15,000 square kilometres) the Okavango Delta in Botswana is one of the largest freshwater inland wetlands on the planet, and it turns the red sands of the Kalahari Desert into a land of plenty.

It is an incredible location for viewing Africa’s amazing wildlife such as lion, elephant, leopard, buffalo and the semi-aquatic red lechwe antelope. It is also home to hundreds of bird species including many that are rare, making this a birdwatcher's paradise.

One of the unique aspects of a visit here is a trip in a mokoro (a locally made dugout canoe) that will take you to inaccessible locations and hidden islands for glorious periods of solitude and wildlife spotting.

View All Tours in Botswana

Wildlife of the Okavango Delta

There is no doubt that the Okavango Delta is one of the best places in Africa for seeing incredible game in a unique environment. The wildlife of the Delta is plentiful, relaxed and superb for photography.

The Delta is one of the few places where you can see the Big Five: lion, leopard, rhino, elephant and buffalo. Big-game hunters coined that term as they regarded those five as potentially the most dangerous of the animals they hunted.

The Linyanti Wetlands, to the north of the Delta, are known for huge herds of elephant and buffalo, particularly in the dry season, while all over the Delta you will find lion, leopard, cheetah, spotted hyena and side-striped jackal.

Certain areas of the Delta also offer a good chance to see the rare African wild dog, while antelope are also prolific, with impala, zebra, wildebeest, kudu, and tsessebe easily sighted. The shy reedbuck inhabits the wetlands and the rare sitatunga can sometimes be spotted in the papyrus swamps. Giraffe, warthog and baboon are found everywhere.

Birdlife in the Delta

The Delta is also renowned for its fantastic birdlife, with little bee-eaters, malachite and giant kingfishers, slaty and black egrets, lesser and purple gallinules, and wattled cranes in the watery areas. There are Meyer's parrots, fiery-necked nightjars and Heuglin's robin; from secretary birds to swallow-tailed bee-eaters, you won't be disappointed.

Flooding in the Delta

The water that creates the Okavango Delta starts life as rain in the highlands of central Angola, some 1,100 kilometres away.

The floodwaters first come into the panhandle area of the Delta in the northwest, usually appearing in April, and slowly work their way through the whole Delta area, reaching the southeastern areas by August. Throughout the rest of the year the waters gradually recede and the areas of dry land increase, but there are areas of permanent water throughout the year. At the centre of the Okavango is one of its largest islands, Chief's Island, which is famous for its game concentrations.

The wonderful thing about the Okavango Delta, however, is that it offers fantastic game viewing and beautiful scenery throughout the year, with something incredibly special to offer in all seasons.

The government of Botswana has introduced a deliberate policy of deterring the "budget traveller" from large parts of the Okavango Delta to try to protect the fragile ecosystems of the area. To achieve this, it has created over a dozen private concession areas that strictly control visitor numbers. Many of these areas are hundreds of square kilometres in size and include a large variety of diverse habitats plus all the usual game viewing.

Our specialists have spent time in all these concessions so they will be able to advise you on the right ones for your trip. 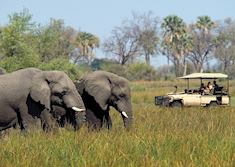 In the southwest of the Okavango Delta, the Abu Concession encompasses deep blue channels and lagoons, verdant green floodplains and sandy islands with ilala and wild date palms. 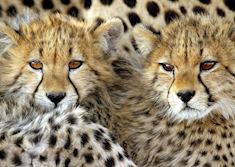 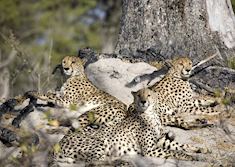 Stanley's Concession is situated to the south of Chief's Island. With the Moremi Game Reserve as its border this is a classic Okavango concession. 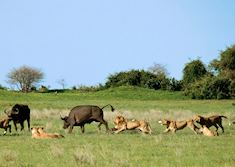 The Duba Concession is home to Botswana’s largest herds of buffalo, and as a consequence, to Africa’s densest lion population. 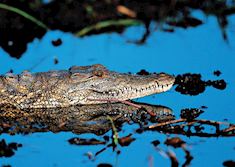 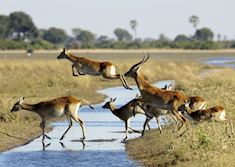 The Jao Concession sits in the southwest reaches of the Okavango. There are a number of small camps on the reserve, ranging from luxury chalets to tree top houses. 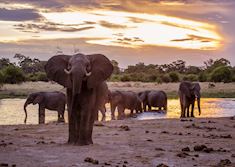 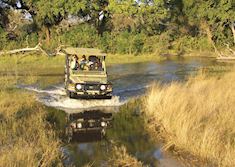 Situated deep in the heart of the Okavango Delta, the Nxabega Concession is predominantly about water. 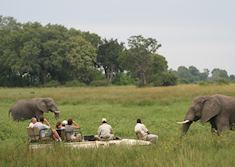 The Kwara Concession borders the Moremi Game Reserve and is a maze of waterways, islands, seasonal floodplains and thick bush. 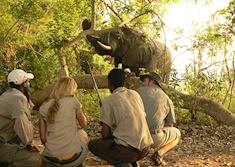 Located to the southwest of the Okavango Delta this huge private concession stretches for 25,000 hectares. 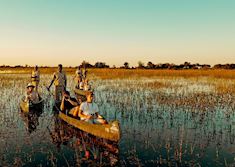 The Shinde Concession is located in the northeastern Delta and shares a long southern boundary with the Moremi Reserve. 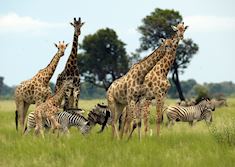 The Vumbura Concession is a mixture of water and dry land, its camps offer game drives, night drives, walks, boat and mokoro trips. 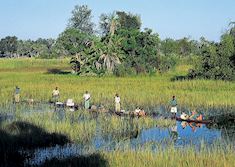 The Xigera Concession is situated in the absolute heart of the Okavango Delta and is superb for birdwatching.