Relatively compact and easy to explore, Florence is a city of stately palazzos and elegant piazzas, connected by narrow, winding lanes full of cafés and artisan shops. It’s a place where even the smallest church, tucked out of the way down backstreets, can contain an artistic masterpiece.

If you’ve the head for it, climb up into the heart of the dome. It offers a close-up view of Vasari’s frescoes portraying the Last Judgement on the dome’s interior, before you head outside for panoramic views over the city. The campanile (bell tower), designed by Giotto, stands separately at one end of the cathedral. It’s equally worth the climb for a view that includes the Duomo. 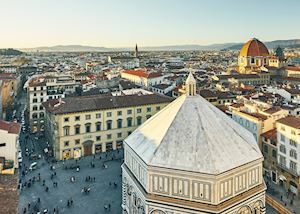 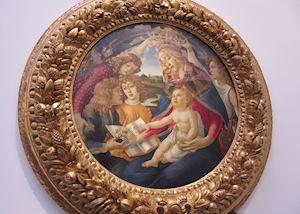 The museum also contains Michelangelo’s Prigioni (either prisoners or slaves), initially intended for the tomb of Pope Julius II. The four writhing forms are unfinished and seem to struggle to escape the marble. Nearby, the first-floor cells of the Museum San Marco, a former 15th-century religious complex, feature some of the best examples of frescoes by Fra’Angelico.

The piazza in front of the basilica was sometimes cleared for worshippers at times when the church was full. Throughout the Middle Ages, it hosted jousting and festivals. 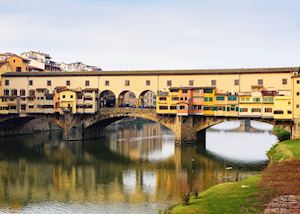 Oltrarno’s sprawling Pitti Palace was home to city’s ruling families from the Medicis to the Savoys. Donated to the state in 1919, it’s now a museum complex. The Palatine Gallery is the biggest draw, containing opulently furnished apartments from the Medici and Savoy periods.

Our expert guides to exploring Florence

Written by our specialists from their own experiences of visiting Florence, these guides will help you make the most of your time there. We share both our practical recommendations and the best ways to appreciate Florence at its best.