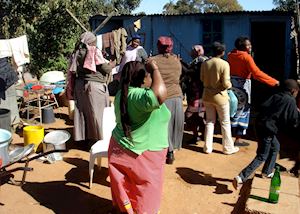 Far from many people’s perceptions of Johannesburg, the trendy Maboneng Precinct in the east of the city is a hub of art, food, cafés and boutiques. Once a deprived area rife with crime, vacant buildings and derelict warehouses, the regeneration of Maboneng (which means ‘place of light’ in Sotho) began in 2008. Developer Jonathan Liebmann bought some of the rundown buildings with the aim of transforming them into places where art and culture could thrive.

The result is Arts on Main, a former warehouse that now hosts artists’ studios, galleries, restaurants, cafés and independent shops. On Sunday mornings (and the evening of the first Thursday of the month) it also holds the Market on Main — an extravaganza of food stalls, locally made crafts, clothing and accessories that demonstrates the city’s multicultural heritage and creative flair. You can sample the likes of Ethiopian curry and bunny chow (curry served in hollowed-out bread originating from Durban), or purchase a Maasai belt. 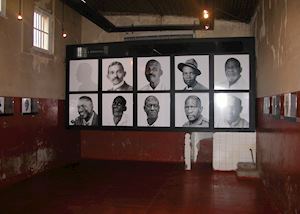 Around 50 km (31 miles) northwest of Johannesburg lie the Sterkfontein Caves, part of the Cradle of Humankind World Heritage Site — a huge network of limestone caves. More than one third of the world’s oldest hominid fossils have been discovered in this area, allowing palaeontologists to piece together human evolution.