From here, you could head to the Dutch area, which focuses around the Dutch Hospital. This 17th-century complex is one of the oldest surviving buildings in the city and has been carefully restored. Its colonnaded arcades host shops selling artisan crafts — thickly woven, vibrantly dyed textiles are a specialty — and cafés serving Ceylon tea alongside cocktails. 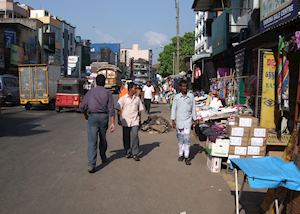 It’s also worth making time to visit Pettah Market, the country’s largest marketplace. You’re almost guaranteed to lose your bearings, so we advise taking a tour with a guide. Each street is neatly arranged into specialties, from jewellery to potatoes, and there’s a constant hum of sales patter. Look out for wood apples — a soft, off-white fruit shaped like a ball. They might smell like blue cheese, but they go into producing a popular sweet-and-sour juice.

Gangaramaya Temple is an unassuming dot on the map, a short walk from Galle Face Green. Walk inside, though, and you’ll find huge piles of glasses, gold ingots, toy elephants (plus a life-size model), baskets of food and gold-leafed books. Reverent of one of the oldest temples in Colombo, many Buddhists regularly donate their valuables there (seeing it as an act to reduce personal greed) — there are even a few cars.

Sri Lanka has a complex series of monsoons, which can make weather predictions tricky. But, generally, the best time to go to Colombo is from January to April or from mid-July to September, when it’s dry and temperatures hover around 29°C (84°F) at midday.