For an island roughly the size of Portugal, Sri Lanka boasts an impressive 22 national parks. Udawalawe is to the south of Horton Plains, whose great rock escarpment provides a backdrop to the park’s open plains, scrubland and wetlands. With its large, central reservoir, the park has become known for its herd of about 250 elephants, which are relatively easy to spot as they graze on the surrounding grasslands. 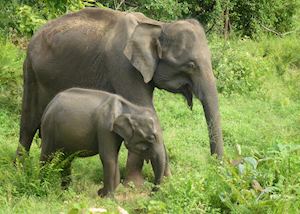 Sri Lankan weather patterns are notoriously complex, so we recommend discussing when to go to Udawalawe National Park in more detail with our Sri Lanka specialists. In general, the best time to travel to Udawalawe is from January to March, when rainfall is at its lowest and daytime temperatures average a comfortable 26°C (79°F).

Our itineraries will give you suggestions for what is possible when you travel in Udawalawe National Park, and they showcase routes we know work particularly well. Treat them as inspiration, because your trip will be created uniquely by one of our specialists.

We’ve selected a range of accommodation options for when you visit Udawalawe National Park. Our choices usually come recommended for their character, facilities and service or location. Our specialists always aim to suggest properties that match your preferences.

Our specialists seek out authentic ways to get to know the places that could feature in your trip. These activities reflect some of the experiences they've most enjoyed while visiting Udawalawe National Park, and which use the best local guides.