Stretched out along the curving banks of the Vienne, a tributary of the Loire River, medieval Chinon is a warren of narrow, cobbled streets dominated by a hilltop château. It was here that Henry II, King of England, spent much of his time, and later, in 1429, Joan of Arc had her first meeting with Charles VII in an attempt to persuade him that he was the rightful king of France.

The château offers views over the town’s steep-gabled rooftops and across the valley below, which supports a large number of vineyards, many of which you can visit.

Though Chinon is best known for its red wines and its history Joan d’Arc, when I’m there I like to admire the view from the ramparts of the Château de Chinon, overlooking the medieval town and down the Vienne river.

Things to see and do in Chinon

Occupying a site that has existed since the Iron Age, the Château de Chinon dwarfs the town below. Deep dry moats separate the fortress into three distinct parts: the 12th-century Fort Saint-Georges, the 13th-century Tour du Coudray and, between them, the Château du Milieu (Middle Castle), which was built between the 12th and 14th centuries.

In the south wing of the Château du Milieu, where the Plantagenet court of Henry II met, you can also see the royal apartments of Charles VII and Mary of Anjou, which contain scale models of the castle, multimedia exhibits, and some of the bones of Joan of Arc.

Nearby, in the Tour du Coudray, you can see graffiti etched into the stone walls by imprisoned Knights Templar in the early 1300s. 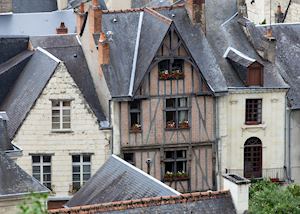 Sitting below the château, the town of Chinon dates largely from medieval times with a maze of meandering streets flanked by half-timbered houses and white tufa (a soft limestone) mansions topped by dark slate roofs.

Rue Voltaire is particularly atmospheric. Its several graceful 17th-century townhouses include the handsome Hôtel du Gouverneur with its harmonious double staircase and carved gateway. At the end of an alleyway off Rue Voltaire are a series of former quarries that were converted into wine cellars in the 15th century.

According to local legend, it was Saint Martin who first planted grapes in the province of Touraine in the 4th century. Whatever the truth, Chinon stands at the heart of one of the Loire's main wine-producing areas, with cabernet franc vineyards stretching along either side of the river.

The Chinon appellation is known for predominantly red wines with a light, dry, medium-bodied quality. A visit to one of the region's vineyards or many wine cellars to meet the producers, see the cultivation techniques and taste the wines, is highly rewarding.