The Meru National Park covers an area of 1,813 square kilometres to the north east of Kenya. It is bordered by the Kora, Rahole and Bisanadi Reserves.

Well off the mainstream tourist circuit, Meru is not a reserve to come and tick off the big five. Rather it is a wilderness experience. The horizons are endless and game wild. Huge tracts of the park have no roads and must be explored on foot. On the roads that there are, minibuses are never seen. You might see a park ranger or lion researcher in an old Land Rover but that is the extent of the traffic. Finally, Meru is perhaps best known for Elsa the lioness, who was released here and made famous by Joy Adamson's books. 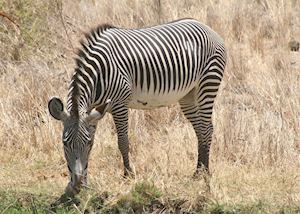 Meru has a good network of dirt roads which allow you to access many areas of the park. There is increasingly good game including elephant, black rhino, reticulated giraffe, Grevy's and common zebra, Grant's gazelle, lesser kudu, gerenuk and Beisa oryx. Predators are also present including lion, leopard and cheetah. The lion are particularly interesting as many of the males have very small manes. All the animals are still quite shy and this is not a place to race about from herd to herd. Rather it is a park to see zebra in the sunset, lion in the tall grass, learn about the birds and trees. 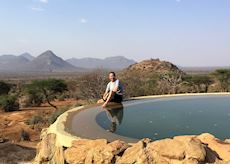