Hailey's love for travel and adventure began in college, when she left her small hometown in New Hampshire and ventured off to Copenhagen in Denmark to live for the next six months.

Since then, Hailey's travels have taken her all over the world. Some of her highlights include: camping in the Namib Desert, hiking in the Drakensberg in South Africa, skiing the Austrian Alps, watching the sun set on Table Mountain in Cape Town, sailing in the British Virgin Islands, running down the dunes of Sossusvlei, climbing Roy's Peak in New Zealand, seeing the sunrise over Machu Picchu, experiencing mokoro in the Okavango Delta, and spotting the Big Five in the famous Sabi Sands in South Africa.

Hailey's biggest passion in life and one of her favourite mottos is 'spend money on experiences, not things,' and she loves to share her enthusiasm of Southern Africa with her clients. Despite Hailey's love for being on the go, her happiest days are spent back home in Massachusetts on the beach with her husband, two kids and English bulldog.

Start planning your trip to Africa with Hailey 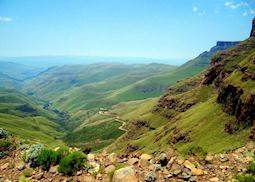 The Drakensberg region, within KwaZulu-Natal, is hands down my favourite destination within South Africa. Just a few hours west of Durban, you are surrounded by the most beautiful scenery in the whole country. Everywhere you go within the Drakensberg, the stunning backdrop of the famous mountain range will follow. Travellers in this area will often make their way to visit the caves that are home to the astonishing Bushmen paintings, which were created over 5,000 years ago. The Drakensberg is mostly known for its outdoor activities whether it’s horseback riding, hiking, mountain biking, cycling and is the perfect place for an adventure enthusiast. The region also attracts many historians, as some of the most famous Zulu battles took place on this land. The Drakensberg is a remarkable place that has an endless amount of activities and tours to offer. 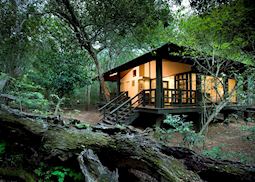 Phinda Forest Lodge is a unique accommodation, situated in a rare sand forest. The suites are surrounded with floor to ceiling glass walls and don’t worry, privacy is still ensured with the dense canopy surroundings. Each suite is equipped with unique amenities like yoga mats and outdoor showers. The best part of Phinda Forest Lodge is that you don’t even need to leave your suite to view game! Antelope, monkeys and other animals are often wandering about the property. The “Big 5” game viewing is consistent within the Phinda Reserve and the superb guides are sure to make your experience unforgettable. Walking safaris, scuba safaris, turtle nesting adventures (available Nov-Feb) and even spending a night under the stars are just a few other activities that this diverse place has to offer.

On one of my first safari drives in the Eastern Cape, in the Shamwari game reserve, I was extremely fortunate to witness a rare sighting of two lion prides going head to head. We had seen a Northern pride of six female lion the day before and soon identified them the morning after, as they were chomping away at a recent Warthog kill. Suddenly, two of the females became alert and sighted something in the distance, which Phillip (our guide) initially thought might be another kill in sight.