Why visit? 'A small pocket of heaven hidden away in a small bay on Kangaroo Island. From the small car park you walk through caves and arches until you come out to this view.'

Kangaroo Island is one of Australia's finest reserves. It has a coastline of towering cliffs and sheltered beaches, and an interior covered in dense bush and forest. Flinders Chase National Park can be found at the western end, where there are resident populations of koala, echidna, possum and platyplus. There are also hundreds of sea lions at Seal Bay, southwest of the main town of Kingscote.

Why visit? 'The striking red rock, oasis, abundant wildlife, stunning vistas and miles of walking track make this probably the most beautiful gorge in Australia. It's also Australia's largest and most spectacular canyon.'

Make sure to visit King's Canyon in the Australian winter between May and September for the coolest temperatures as in summer temperatures soar and you won't be able to complete the fantastic Gorge Rim Walk. For the less agile, a creek walk leads along the canyon base through the wood, with plenty of waterholes for a cooling dip.

Why visit? 'The Great Ocean Road is one of the greatest coastal drives in the world. It's a well-trodden path but only a few visitors get away from the beaten track and head inland. There are a number of beautiful waterfalls in the region as well as bush walks.'

The Great Ocean Road hugs the contours of Victoria’s rugged coast. It snakes from the surf capital of Torquay past cliffs, scenic lookouts, rainforests, wrecked ships, and laidback fishing villages on its way to Port Fairy. Picturesque Warrnambool, less than half an hour from Port Fairy, is a lovely maritime village where each June southern right whales visit to calve offshore.

Why visit? 'The whole West Coast of Australia boasts stunning beaches with crystal clear water. However, Shell Beach in the World Heritage Site of Shark Bay is particularly amazing. The whole beach is made up of trillions of crushed white shells and the water is shallow and warm. You may spot shovel-nosed rays in the shallows as you paddle.'

Often overshadowed by the rival attraction of the visiting dolphins at Monkey Mia a few miles away, the Shark Bay Marine Park provides a far less commercial experience. A host of walking trails link rugged sea cliffs to tranquil lagoons and there is a prolific amount of sea life including whales, dolphins and nesting turtles.

'The Margaret River region has so much more to offer than fine wine. The capes to the north and south offer excellent walking tracks with stunning views of the coast. Whales can be seen migrating between June and October which is also the best time to visit the area.'

Three hours south of Perth by road, the beautiful Margaret River region is known for its natural beauty and peaceful pace. It's particularly pretty in the wildflower season from October to November, when the landscape bursts to life in a kaleidoscope of color.

Why visit? 'Its remote location in the heart of the outback means you'll have these giant, red, marble-like rocks to explore by yourself. They perch at seemingly impossible angles and are a real highlight of the Australian outback.'

Formed by erosion over millions of years, the Devil's Marbles are made of granite, which surfaces like an island in the desert. They vary in size, from 50 centimeters up to six meters across (19.6 feet). The boulders have great significance for the Aboriginal people and most of the conservation reserve is protected under the Northern Territory Aboriginal Sacred Sites Act.

Plan a trip to Australia 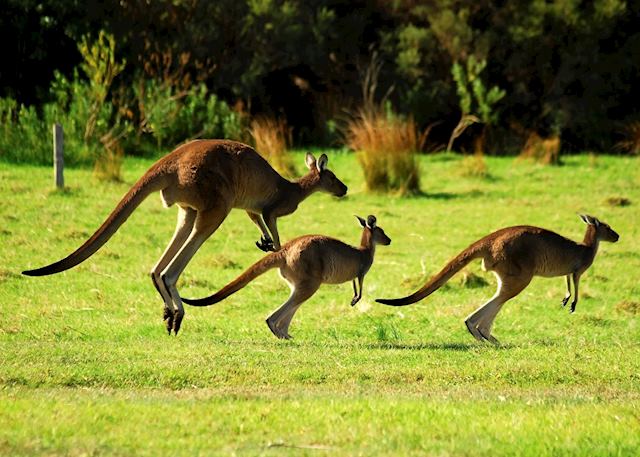